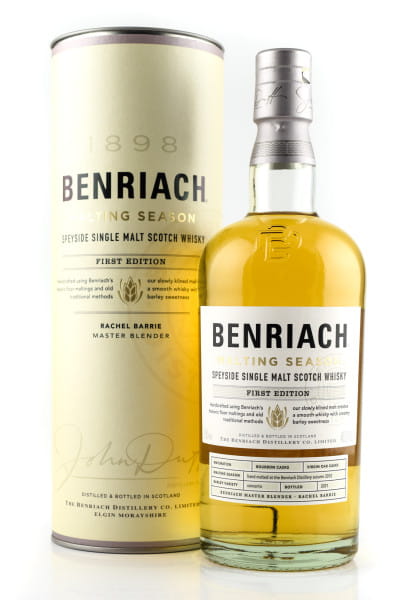 Description Evaluations 0
Description
Close menu
Product information "Benriach Malting Season First Edition 48,7%vol. 0,7l"
Benriach is one of only two remaining distilleries in the Speyside that distill whisky from malted barley from their own floor maltings.
This preserves a tradition that began in 1898 with the founding of the distillery by John Duff.

Most of the year the distillery sources Scottish barley for the production of its own single malts, which is malted in the Speyside.
Once a year, however, Benriach celebrates the long-standing tradition of malting the local Scottish barley by hand on its own historic malting floor.
This time is called "Malting Season" by Benriach.


Every year during the "malting season" the dedicated team from Benriach malts barley on site according to old tradition in this historic malt house.
The malt that is produced during the "Malting Season" results in a full-bodied and creamy single malt whisky of extraordinary diversity.

It pays homage to the founders and the tried and tested craftsmanship of his historic malting, the the team of experienced skilled workers has continued to this day, always striving for exceptional taste.