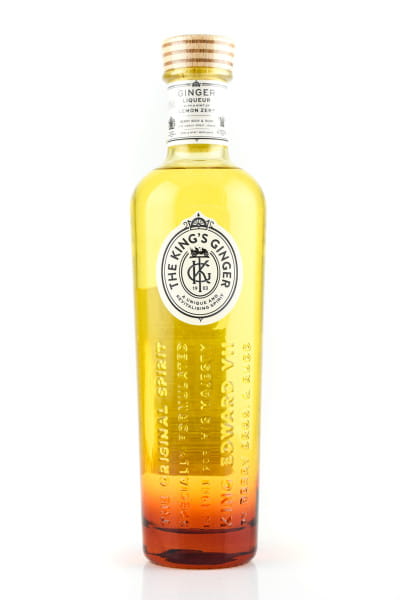 Description Evaluations 0
Description
Close menu
Product information "The King's Ginger Liqueur 29,9%vol. 0,5l"
King Edward VII literally lived in the fast lane.
No weather stopped him from driving in his "horseless carriage" (a Daimler).
But in 1903 the royal personal physician began to worry about the health of the monarch, who exposed himself to the strong winds at any time of the year.
So he turned to Berry Bros. & Rudd, the purveyor to the court, to find a solution - and set the wheels in motion that led to the birth of The King's Ginger: a bespoke liquor designed to warm and invigorate His Majesty.
The King's Ginger is still made today from a grain spirit base with lots of fresh ginger and livened up with lemon.
Intense, golden yellow and fresh and sparkling in taste, it helped King Edward to stay in shape and ready for whatever was to come.
Much has changed in 117 years, but one thing has remained constant: The King's Ginger is a powerfully warming, at the same time tangy, fresh spirit for everyone who likes to live adventurously - and is still popular today.
Berry Bros. & Rudd took this as an opportunity for a new design of the royal spirit.
The result is the most modern and at the same time most traditional bottle: a reinterpretation of King Edwards' original saddle bottle that always accompanied him outside.
The Daimler is immortalized in the form of a steering wheel on the wooden cork.
The recipe has also been revised: It now contains a higher proportion of ginger in order to radiate even more of the spicy warmth of the tuber.
At the same time, Berry Bros. & Rudd has the strength to a milder 29.9%vol. lowered alcohol content to make the liqueur more versatile.
All decisions have paid off: The King's Ginger was awarded a gold medal at the San Francisco World Spirits Competition 2021.
With its invigorating properties, The King's Ginger is perfect for the cool season.
On excursions or around the campfire: It does not only develop its character when enjoyed on its own.
The ginger liqueur also comes into its own in many drinks - for example in mulled apple wine or hot chocolate.
Nose: a cloud of fresh, natural ginger with a hint of lemon
Taste: the initial sweetness of ginger syrup is gently interrupted by the tingling of fresh ginger and subtle and gentle lemon notes
Finish: warm, full-bodied and of great length