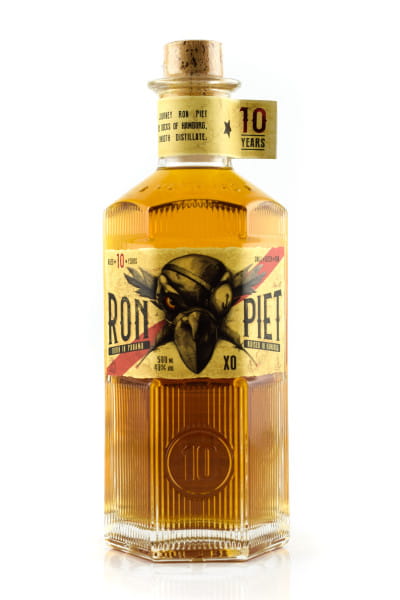 Ron Piet was once the loyal parrot of a notorious pirate.
Together they were considered the horror of the seas. One fateful day, your ship was attacked by other pirates.
The entire crew and the cargo sank to the bottom of the sea, including the shipwreck.
The shipwreck was a real tragedy.

Only Ron Piet and a single barrel got away unscathed. Clinging to the barrel and too weak to fly, Ron Piet was exposed to the stormy seas.
He was drifting east. "Ron 10 Anos Panama" was engraved on the barrel.
A few days of danger had now passed on the rough seas.

An ominous bar owner found him and the barrel neglected on the Elbe beach.
Without knowing what to expect, he took her with him and brought her to his bar. The bird recovered only slowly from the grueling journey.

One day the man remembered the barrel on which Ron Piet had come to Hamburg.
Grabbed by his curiosity, he stabbed the barrel and discovered the unbelievable: the most delicious rum he had ever tasted!

The rum was found to be sinfully delicious, now all that was needed was a name.
Based on the engraving in the barrel, he named the rum and the parrot Ron Piet.
From that day on, the bar owner and Ron Piet only poured out this one rum.
They became the most inseparable duo in town. Only they knew the delicious secret of rum.

The journey of every single bottle of RON PIET begins on a sugar cane plantation in southern Panama.
Until it finds its well-deserved place in an in-house bar, it goes through a strictly controlled manufacturing process in the production facility in San Miguelito, which gives it its incomparable, fruity-smooth note.

After 10 years of maturity, RON PIET finally embarks on the long and stormy journey to Hamburg.
As soon as he has reached the docks of the Hanseatic city, he gets enough rest and renewed storage time in the family-run Hamburg manufactory.
The floor-to-ceiling warehouse made from former bourbon barrels is located at the head of a beautiful 1,100 square meter factory directly on the Bille.
After the storage period, each barrel is thoroughly checked and the quality and taste of the well-traveled rum is convinced before RON PIET is filled into the characteristic hexagonal bottles by hand.