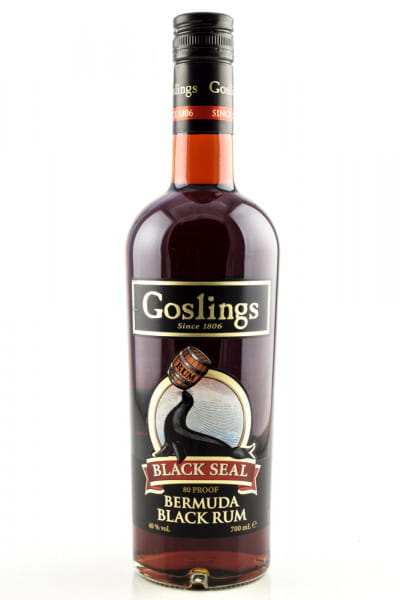 Yes, they are shrouded in mystery, the remote Bermuda Islands, around 1,500 kilometers east of the American mainland. Ships and planes are supposed to disappear there in a puzzling way ...

The Goslings Black Seal Bermuda Black Rum is at home here. And somehow the bottle looks a bit mysterious, wild and wicked. Deep black and blood red dominate the label, on which a black seal balances a rum barrel and which involuntarily reminds a little of pirates. The black seal refers to the name in a playful manner. Because Black Seal can mean "Black Seal" - which would refer to pirates as well as high quality. But it can also mean "black seal". We do not know whether this is typical for Bermuda. But it is unmistakable. And the Goslings Black Seal is also deeply dark, almost black.

The rum comes from the traditional Goslings Distillery, which was founded in 1806 and is still managed by the descendants of the company's founder, James Gosling.

For the creation of the Goslings Black Seal, two different firing devices are used, the classic copper pot stills as well as continuous stills. The blended rum is then aged for 3 years in oak barrels, which give it its color and complex, powerful taste. A taste that also gives cocktails and long drinks the right character. In particular, the "Dark 'n Stormy" is worth mentioning, for which Gosling even has a patent. The spicy long drink consists of 2 cl Original Goslings Black Seal Bermuda Rum, which is filled with ginger beer and served with plenty of ice in a highball glass. Cheers!

Tasting Notes: This is how the Goslings Black Seal Bermuda Black Rum tastes