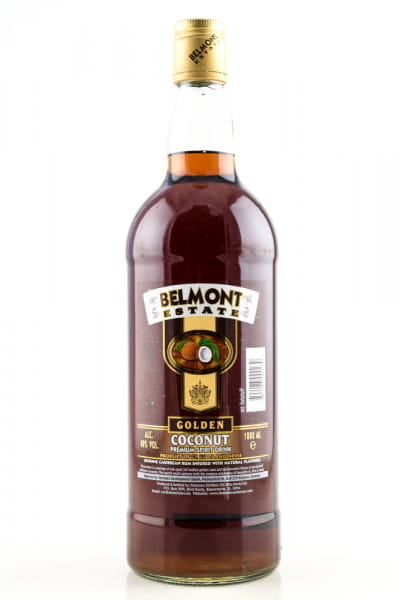 Profile: The Belmont Estate Golden Coconut at a glance

Rum or not rum? That is the question. In the sense of EU liquor law, the answer is: No rum. Because, according to the regulation: "Rum is a liquor that is obtained exclusively by alcoholic fermentation and distillation of molasses or syrup from the production of cane sugar or from the juice of sugar cane itself distilled to less than 96% vol so that the distillate has a noticeable degree of the special sensory properties of rum (...). "For real rum, among other things, it is also required that it not be flavored.

And there the rabbit lies in the pepper. Or more precisely: the coconut. Because the Belmont Estate Golden Coconut is primarily a high-quality Caribbean rum that has been matured in oak barrels for four years - but it has been mixed with fresh coconuts to give it its special character. The remarkable thing about it: The rum was not simply flavored with artificial flavors or extracts of the coconut. Rather, pieces of the real, sun-ripened coconut meat are added to the distillate, dissolved there and mature with it. The coconut aromas and flavors are very intensively introduced into the rum.

The result offers an exceptional enjoyment experience - and instead of "rum" on the bottle label it is called "Premium Spirit Drink".

Incidentally, the procedure does not originate from the current home of the Belmont Estate. It was invented in Jamaica by Dr. Ian Sangster. After his death in 2000, production was moved to St. Kitts in the Lesser Antilles in the eastern Caribbean. The tropical climate with the hot trade winds there is ideal for the cultivation and processing of sugar cane. Nevertheless, rum from St. Kitts & Nevis has so far been an insider tip and is only produced in comparatively small quantities.

Behind the Belmont Estate Golden Coconut is none other than Demerara Distillers Limited, DDL. They are one of the big names on the rum market and stand for high quality. The Demerara Distillers, named after the river at their headquarters in Guyana, are exclusively responsible for the famous Demerara rum. However, they also produce bottlings from other brands, of which the Belmont Estate is one of the newest.

The deep dark coconut flavored rum was awarded gold at the German Rum Festival in Berlin 2011.

Tasting Notes: This is how the Belmont Estate Golden Coconut tastes