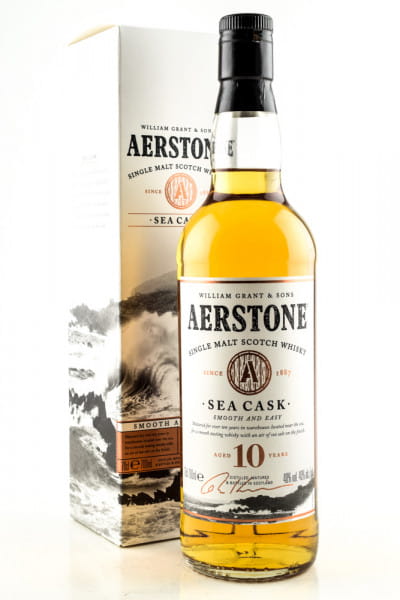 Profile: An overview of the Aerstone Sea Cask

With the Aerstone Sea Cask, William Grant & Sons offer an excellent mild malt for every day. A dram that should convince beginners and die-hard friends of soft, fine whiskeys alike. Especially since the unusually low price for a 10-year-old makes access extremely easy.

William Grant? Aren't they ...? That's right: this is the legendary family of whiskeys that own the Glenfiddich, Balvenie and Kininvie distilleries. Located in the "Whiskey Capital" Dufftown in the Speyside area, the Grants made whiskey history. Without their courage to make the Glenfiddich nationwide available as a single malt and not only to use it namelessly for blends, today's diverse whiskey landscape would not exist.

With the Aerstone, the Grants are now opening a new chapter outside of their home in the Highlands. In 2007, William Grant & Sons built Ailsa Bay Distillery on the west coast of the Lowlands on the site of the Gravan Whiskey Distillery Girvan. The ultra-modern Ailsa Bay distillery - unlike other distilleries - is very flexible in production and can produce five different raw fires. The 16 stills are modeled on those of Balvenie. And one of the distillery's goals is to produce a whiskey that will replace the Balvenie in Grant's blends. So that the Balvenie can fill more than single malt.

The first widely available bottlings are offered under the name Aerstone. There is a non-smoky variant, the "Sea Cask", and also a smoky brother called "Land Cask." As the name suggests, the Sea Cask was stored near the sea, the Land Cask further inland.

Both are absolutely worth trying.

Tasting Notes: This is how the Aerstone Sea Cask tastes

From: Jochen On: 28 Aug 2021
This rating has not been checked for authenticity.

From: Karin On: 5 Jan 2021
This rating has not been checked for authenticity.

From: Marinus On: 17 Dec 2020
This rating has not been checked for authenticity.

From: Rui Yel On: 19 Oct 2020
This rating has not been checked for authenticity.

From: Arnold On: 20 Aug 2020
This rating has not been checked for authenticity.