Cookie preferences
This website uses cookies, which are necessary for the technical operation of the website and are always set. Other cookies, which increase the comfort when using this website, are used for direct advertising or to facilitate interaction with other websites and social networks, are only set with your consent.
Configuration
Technically required
These cookies are necessary for the basic functions of the shop.
"Allow all cookies" cookie
"Decline all cookies" cookie
Amazon Pay
CSRF token
Cookie preferences
Currency change
Customer-specific caching
Individual prices
PayPal payments
Selected shop
Session
Comfort functions
These cookies are used to make the shopping experience even more appealing, for example for the recognition of the visitor.
Note
Statistics & Tracking
Affiliate program
Google Analytics
Google Analytics / AdWords
Track device being used
Categories
Information 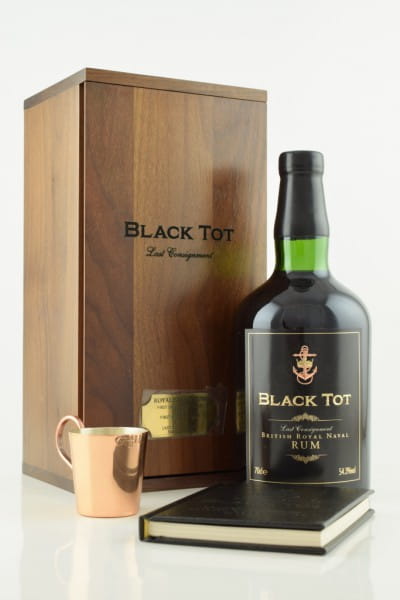 For more than 300 years rum was served to the crews of the Royal-Bitish Marine.
Unofficial since 1655, officially since 1731.
On July 31, 1970 ended this ancient tradition in the Royal British Navy - with 6 glasses to the morning watch (11.00 clock), the last ration of rum was issued on board the ships.
This day went down in the history of British shipping as Black Tot Day.

So the now 40-year-old rum was filled in exclusive bottles and along with a book that describes the history of this rum and the Navy, a copper-plated measuring cup, as it was then used for the allocation, and an extra cork, the bottle is corked like a wine bottle, put in a beautifully designed walnut wooden box.

These are the last stocks of the British Navy, which were bottled after nearly 40 years as a "Last Consignment".
A piece of maritime history that began in 1635.

The alcohol content of 54.3%vol. is very remarkable for the age of 40 years, it is almost the original alcohol level 40 years ago

From: anonym On: 26 Dec 2014
This rating has not been checked for authenticity.